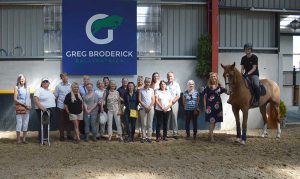 BALLYPATRICK STABLES
On arrival we were greeted and shown round by Olga Doyle (Greg Broderick’s sister). Greg represented Ireland as the only Irish show jumper at the Rio Olympics in 2016. I think to say we were blown away by the organisation of the whole operation was an understatement. There was design and thought oozing out of every corner. The whole underlying principle of the yard is a horse centred equine production where no corner is cut and no detail forgotten. First, we were shown around the newly constructed barn and client reception rooms all of which were beautifully finished and appointed with everything an international buyer could want; kitchen, comfortable seating and viewing galleries of both the indoor school and two grass arenas.

The American barn had a traditional look and feel with beautiful bamboo doors, a resilient non-water absorbing material with the V opening off to one side to protect the door from horse damage. Each stable was kitted out to perfection with sealed rubber matting throughout, deep shavings beds, sloping drains and innovative drinkers shrouded with a protective cage to prevent damage. The barn also hosted the most elegant tacking up stalls, wash bays, feed room and tack room all of which demonstrated fantastic design features – in the tack room there is a thermostatically controlled underfloor heating system. A huge upgrade from Greg’s original yard where exactly the same care was being given to those horses as they were prepared for exercise.

During discussion Olga made it clear that it is not only about the riding and the facilities but the care and recovery that are essential to successful horse training, with a vibration plate onsite which combined with regular hacking out and visits to the river as a natural hydro spa scheduled for each horse meant we saw some very happy horses. Daily individual turn out is key at Ballypatrick, however if a horse needs a companion “Jessie” the pony is always on hand for moral support!! The young horses were group housed in groups of six giving them time to “Be Horses” as they start their equine journey.

With 66 horses here in training and 20 staff this operation truly is mammoth. It was striking that though Greg was away competing in Belgium every staff member quietly worked away to the same motto, “It’s the last 1% that makes the difference” -Olga Doyle.

Prior to going across to Fethard we were treated to Ballypatrick hospitality with masses of coffee tea and homemade cakes and scones.

FETHARD HORSE MUSEUM
Fethard Horse Museum was a fantastic opportunity to understand the key place the thoroughbred horse has in County Tipperary. There was plenty of background information into the history of the town, showing how Coolmore Stud and Aidan O’Brien’s Ballydoyle has become the mainstay of the thoroughbred industry. Here we say Sadler’s Wells skeleton – what a small horse for such enormous talent, the sire of so many winners who lived till he was 30.

COOLMORE STUD
We arrived at Coolmore meeting our guide Jack Dolan at the bronze statue of ‘Be Our Guest’. The original 350 acre farm was bought by the syndicate of John Magnier, Vincent O’Brien and Robert Sangster in 1975 making it one of the newer stud farms in Ireland. From there it grew into the 7,000 acres in the heart of the Golden Vale. All the hay and feed are grown on the farm which also has a beef enterprise, however, we were there to see the stallions. There are 16 stallions standing at Coolmore part of the 66 that make up Coolmore International which takes in USA Australia and Ireland.

We visited many of the 16 stallions on the stallion yards, including the new ones Carrivaggio and Churchill. Unfortunately, we did not see the world famous Galileo – son of Sadler’s Wells – who was out for his 4 mile walk on an enclosed wood-chip walkway. Walking around the stallions was like walking round an up market semi-detached housing estate. Each pair of horses had their own ‘house’ with a central tack room. Their daily programme includes daily turn out in individual paddocks, walking on the wood chip walk and ‘canter-work’ in the lunge pen to keep them in peak condition, which in turn keeps their fertility as high as possible. As the covering season in the Northern hemisphere now draws to a close some of the stallions travel to the Southern hemisphere, to Coolmore Australia.
After visiting many of the stallions Jack took us thorough the covering process including swabs etc. Biosecurity is a huge concern at Coolmore with all swabbed and teased by ‘Marmalade’, the most important person in the covering yard Jack explained as we saw this small bay bundle! The coverings are also filmed, again for security reasons.

Overall a fantastic day and many thanks to Faith Ponsonby for organising such a fabulous day. A donation of £240 was made to the charity CALM in memory of Tom Searle. We are all looking forward to next year – same week for your diaries- when we will visit Jessica Harrington National Hunt Trainer and the National Stud.