A truly exceptional lady, Pat Smallwood FBHS, who died in 1998 left a legacy to many current instructors and trainers within the BHS and the equestrian industry.

Pat, or Miss Smallwood as she was usually called, owned Radnage House Riding School. This was run as a successful commercial family business, but there was much more to Pat Smallwood and Radnage than met the eye. She was very interested and involved in all sections of the equestrian world and once Pat became interested in something she became involved in it. There are two examples which I can remember clearly.

The first occasion involved the Pony Club when Pat asked my opinion of the PC ‘A’ test. At that time I was a Pony Club branch Chief Instructor and trained and examined candidates for the ‘A’ test. The exam format included an initial assessment of riding the horses outside. Should a candidate fail this section, then they were not permitted to ride in the Dressage section in the afternoon.

Pat was against this and wanted to change the approach and allow the candidates to sit the Dressage section regardless of the outcome of riding outside. I was in total agreement with this as well, in order that the candidates would know where they were in their overall competence at this level. Historically, this subject had been taken off the PC Conference when Pat brought it up again. The Chairman said she would consider the point . . . when Pat said very politely, but very determinedly, that it had been under consideration for five years and needed changing now – and the chairman agreed! From that point on, the PC ‘A’ test ran as Pat Smallwood had suggested.

Secondly, Radnage was an excellent centre for Riding for the Disabled (RDA). Many of the established BHS Instructors (Gill Watson FBHS, myself and many others) taught in the groups throughout the country, although many of the group instructors held no formal qualifications. At this time the RDA Association was expanding rapidly. Several of us (Jane Wykeham Musgrave, myself and Pat among them) formulated the RDA Group Instructor qualification and later, the RDA Instructor Qualification. These embedded part of the BHS Intermediate Instructor exam into the standard. Through the development and instigation of these training qualifications the RDA would probably not be where it is now without Pat Smallwood’s foresight.

She was also interested in developing and supporting her staff and pupils. She wanted from them the best they could give and achieve. She would help anyone, but woe betide those who thought they were better than they were! Taking an exam without Pat saying that you were good enough was unwise. When Pat asked “When are you going to take the BHSI” (or any other exam), meant that only then were you considered to be ready.

Unfortunately, Pat didn’t have a long and happy retirement. She moved to Gloucestershire with her family, and soon after contracted cancer. She died in January 1998 but left money to be given as an annual award to a hard working, destitute Instructor really keen to progress. 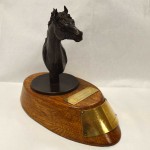 You can probably guess the type of person she would want the award to go to. Not those with support and backing from family or sponsors; not to those having great success in the competition world; but to those working their socks off in the industry that are poor but enthusiastic and keen to gain experience and qualifications in order to help their pupils achieve. In 1988 The Pat Smallwood Award was set up and administered by six trustees.

The money would have run out years ago, but additional funding was donated from Pat’s clients who donated more, boosting the initial amount. Pat’s generosity was contagious as other Instructors delivered their own training days donated their fees to the fund. One person ran the London marathon to raise funding, while the Fellows and Instructors Association (F&I) added to the pot for many years, and so kept the award alive.

In 2008 the Trustees agreed to wind up the Pat Smallwood Award and in 2009 six recipients received an equal share of the remaining money. The award had been running for more than 22 years (there were two years when no suitable nominations were received, so the Award was not given). In addition to the financial benefits that the Award brought to a recipient, was a beautiful horse’s head sculpture designed by Jo Knowles FBHS. This is still awarded annually through the F&I Association and is presented to an Instructor who has put exceptional effort into the Equestrian Industry in a voluntary capacity.

Recipients of the Pat Smallwood Award are:

Now that you have read the background of this amazing lady and the Pat Smallwood Award, please consider if you know of a worthy future recipient and contact Jillie Rogers (current Chairman of the F&I Association) at jillierogers001@gmail.com