Skip to content
Well can I start by saying on behalf of everyone who attended WHAT A FANTASTIC DAY! It was great to see some new faces and also some new BHSI’s who had travelled a long way (across the water) to be with us.
The day started promptly even though the weather was not in favour of anyone who had a long journey to Hartpury. The turnout was excellent so we split into 2 groups for the first sessions. I joined a group with Tim Galer in the Treatment room where we talked about Strangles and observed him scoping a horse with a history of respiratory problems. It was interesting to hear that the Strangles vaccine is not as good as had been hoped; it was found that injections needed to be redone frequently if in a high risk area. However, the Animal Health Trust is working on a blood test for this highly contagious disease. Tim talked about how he would or wouldn’t treat diagnosed animals and the reasons behind this. The scoping was fascinating with the images clearly shown to everyone. There were questions from all of us throughout this session.
We then joined Kathryn Lankervis, to watch her put a horse through its paces on a treadmill. There was an ECG readout on the computer whilst another piece of equipment showed the speed and tilt of the treadmill. At 4.4 metres per second the horse was traveling as fast as Paula Radcliffe in a marathon, its fastest was 6 metres per second. The treadmill is great for repeated work as every variable can be kept the same as the last time it was used. Towards the end of this session a discussion took place within our group on Lactic Acid and on the use of Nasal Strips.
From here we moved back to the warmth of the classroom to watch a short video of scoping a horse while it was on a treadmill. This was followed by two more scoping videos showing the difference in the opening of the larynx and a third where the epiglottis can go under the soft palate. 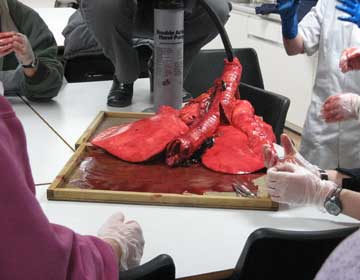 Then we were off to the Lab to look at heart and lungs. Some brave souls took part in the dissections but others of us were happy to watch. Tim showed us the soft palate and epiglottis whilst Kathryn showed us heart and lungs. Jo Winfield did a very good job on inflating the lungs and William Blane may have a new found profession as the new David Bailey! We were all amazed how large the lungs inflated to, especially as they were from a 15.2Hh horse. The other thing which astounded us was the size of the heart and the width of the aorta. This was a great session but it didn’t put anyone off their lunch. 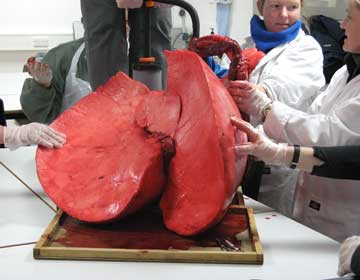 After lunch we went back to the Treatment room for a workshop on lameness with both Tim and Jo. Again we were in two groups and our group started with Jo. We watched Sam ride her own horse which has developed problems with jumping since last year. We learned about their partnership as we watched Sam work her on circles and straight lines. They then moved on to leg yielding which the mare found incredibly hard. A good discussion developed on where the mare was not quite right and we then watched the mare trot up in hand. We were all encouraged to give our views on what we could see.
Our last session of the day was back with Tim where we talked through what we would expect to see with hind limb lameness. It was thought that lameness behind could be confused if you just looked at the hips as what happens up in the pelvis may not be the same that is happening below in the flight path. We then viewed an x-ray on the computer and went through a lot of common problems and where blocks would be administered. Tim then showed us how he would do a flexion test behind. Again we were all stunned at how softly and gently he applied pressure to the hock in the flexion. Why don’t all vets flex in a similar way? We then watched the horse trot up and work on the lunge, observing its movement and listening for a very obvious clicking which could have been stifle or hock.
I’m sure that all who attended the day had a brilliant time and learnt a lot. From all of us a very big thank you to Jo, Tim, Kathryn, and Liz for their time and such a great programme. On talking to people on our way home – when can we do another one please!
Tuesday 19th February 2008
Report by Judith Murphy
Posted in Event Reports
← F and I Annual Convention – Jumping with Di LampardNewsletter – Spring 2008 →
Scroll To Top