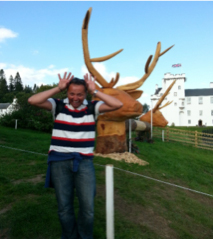 Thanks to the boundless enthusiasm and organisation of Erik MacKechnie we were treated to a course walk with British Eventing’s World Class Performance Manager and Chef d’Equipe, Yogi Breisner FBHS, on the first day of the Championships.

We met at the second fence on the course, at that point – after the completion of the first day of dressage – Team GB were in first place and Holly Woodhead in individual first place.

Yogi’s introduction gave us a brief overview of the course, a true Championship course built just over the minimum distance but with maximum jumping efforts. He felt that the time of 10 minutes 13 was achievable but would be subject to weather and ground conditions. “Yes”, he said, “rain is forecast” but was very philosophical about it – “it is an outdoor sport after all”. The Course, designed by Ian Stark MBE FBHS, had his trademark big fences. The setting, landscape and attention to detail on the fences was breath-taking but riders won’t have time to appreciate any of it on the way round. One of the most important parts of walking the course is to note how it is roped off, taking the right corners and lines between fences to avoid picking up any nasty little time penalties.

We set off at a fair speed (walk – 9. You couldn’t say it lacked purpose and didn’t cover enough ground!). Yogi explained how the first few fences get the horses set up for the first question which came at fence 4, (up the first hill) the shepherds bothies, a trio of old Scottish cottages. The first two having strategically placed chimney pots encouraging the riders to opt for the inside or outside line before setting up for the final element, a narrow bothie on a downhill slope. . He said that some of the riders are very particular about numbers of strides but others aren’t, so he leaves them to sort out for themselves what is best. We were wisely kept well behind the tapes to keep the going as untouched as possible.

By this time we were heading for the second hill, passing the Olympic Diamond first fence on the way, and onto a good old fashioned upright white gate. Yogi explained how the development of frangible pins had made it possible to reintroduce these gates, apparently not that popular with the riders. He didn’t expect any of the horses to have a problem with it. There was some discussion about the FEI ruling that anyone knocking the gate and causing the frangible pin to break incurred 11 penalties. Yogi thought that any horse clever enough to knock it hard enough to cause it to drop and stay up on its feet didn’t deserve to be penalised. Much nodding in agreement.

On up the next hill. It says a lot for the fitness of members that questions and discussion – and chat – carried on regardless. We stopped at the drop – downhill, hooray – a set of fences to hanging logs into the first water jump. Instead of making too much of striding and lines Yogi talked a lot about the terrain and the effect this has. The downhill carried on to within a couple of strides out from the first element which would not give the riders much time to get the horses set up for the next question, into the water. There were a selection of fences downhill through the woods – good old-fashioned silver birch and a log – towards the second water jump where the direct line straight through was, of course, very much faster than the winding alternative.

Back on uphill to the picnic table where Yogi explained how the good horsemen use the terrain uphill to help set their horses up for the jumps, then round to perhaps one of the most spectacular jumps into the Castle Gardens over a palisade then a cannon and downhill to the giant stag heads before coming back – phew – onto the flat again. Yogi had to leave us at this point but he handed the reins over to Philip Surl his assistant and Technical Director.

We passed the two corner fences in the main arena which were to prove quite influential and after the skinny brushes came to the last water jump which was a true triumph of design and imaginative genius. Incorporating the three Forth Bridges, two complete with buses and trains and the third in construction. In over the Forth Road Bridge, the longer route over barrels ahead then double back into the water, but the quick way a left hand turn over the Railway bridge into the water and over part of the new bridge in construction in the water then out over a narrow brush.

It was lovely to see a Steeplechase fence on the flat and just when you thought you might be staying on the flat, oh look, another hill. This time up to the neeps and down a Hickstead Bank style slope over a haggis and out at the bottom over a skinny box of tatties.

These last few jumps took you past the start and the stables which could prove distracting but you are now within distance of the finish. Still a few more questions to prevent you getting too carried away. Gary Parsonage (Chairman of Selectors of the Pony Team) took over at this point. A traditional rails, ditch, rails then round to a trakhener, an enormous suspended owl hole – a trademark of the designer – then two offset hedges before the final fence, a fairly spooky line of kilted torsos and broadswords before the finish line and home.

We were very lucky and privileged to be taken round by 3 experts and given an insight into the technicalities of riding this course and needless to say we all looked forward to seeing it ridden.

A very big THANKS Erik and Jillie for your dynamism and organisation.